Oozing belief, Japanese ironman Takeshi Inoue believes Tim Tszyu has bitten off more than he can chew and won’t go the distance in next week’s high-stakes super-welterweight showdown in Sydney.

Made of steel and already feasting on prime Australian beef steak, Inoue put on a show in his first training session since arriving in town only on Monday.

Happily posing his eight-pack for the cameras, the powerhouse world No.7 wasted no time displaying why his only defeat in 19 fights has been a tight points decision against Mexico’s unbeaten former WBO junior middleweight champion Jaime Munguia.

“My condition has gotten better and also my punch is now very, very powerful so I can beat Tim Tszyu,” Inoue said through an interpreter on Tuesday. 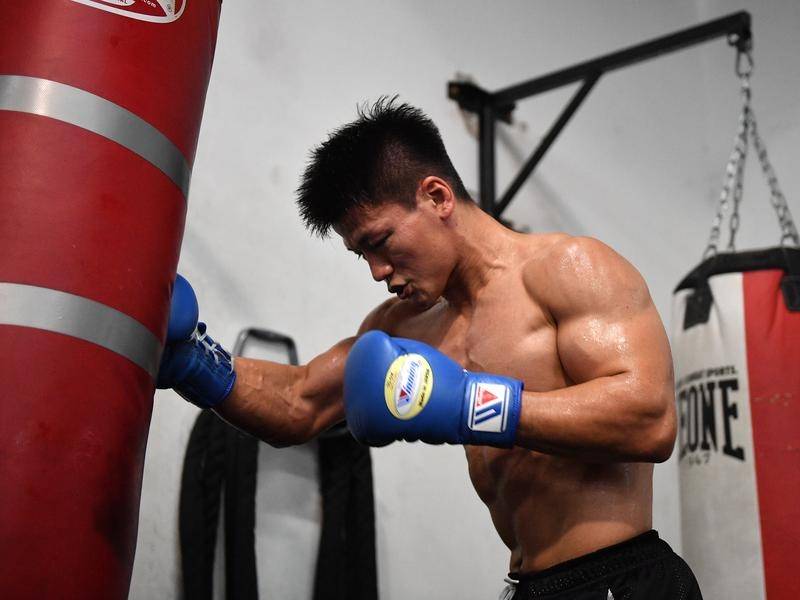 “I respect his results because Tim Tszyu has not lost.

“I respect also his boxing technique and I basically respect everything about him.

“But towards the end of the fight, I’m thinking of knockout. That’s how I’m practising.”

The 31-year-old plans on exposing Tsyzu’s inexperience against genuine world-class international rivals when they collide at Qudos Bank Arena on Wednesday week.

“Tim Tszyu has only had fights in Australia. He hasn’t got experience overseas. I have more experience, including (against) Munguia,” Inoue said.

“OK, I lost but his fight was very close so I am quite confident and I have much more experience so I think I can beat Tim Tszyu.”

Having forged his own formidable 19-from-19 record, Tszyu is the mandatory top-ranked challenger for Brian Castano’s super-welterweight world title next year.

But the Sydneysider readily admits taking on Inoue is a “risk”.

“It is a mistake,” Saita said.

“If I were Tim’s promoter, I wouldn’t let him fight against Takeshi.

“Now he has chosen Takeshi, he may regret his choice.”

Inoue is one of the few opponents to go the full 12 rounds with Munguia, who has won 30 of his 37 bouts by knockout.

And Saita doesn’t expect Tszyu to handle the step up in class, predicting a knockout win for the Japanese warrior “in the seventh to ninth round”.

“Tim Tszyu’s experience is limited to fighting in Australia,” the trainer said.

“I don’t think he has fought a boxer as heavy as Takeshi. Most of his opponents were lighter.

“Although he has fought against Denis Hogan, when I watched the match, I didn’t think Tszyu was that strong.